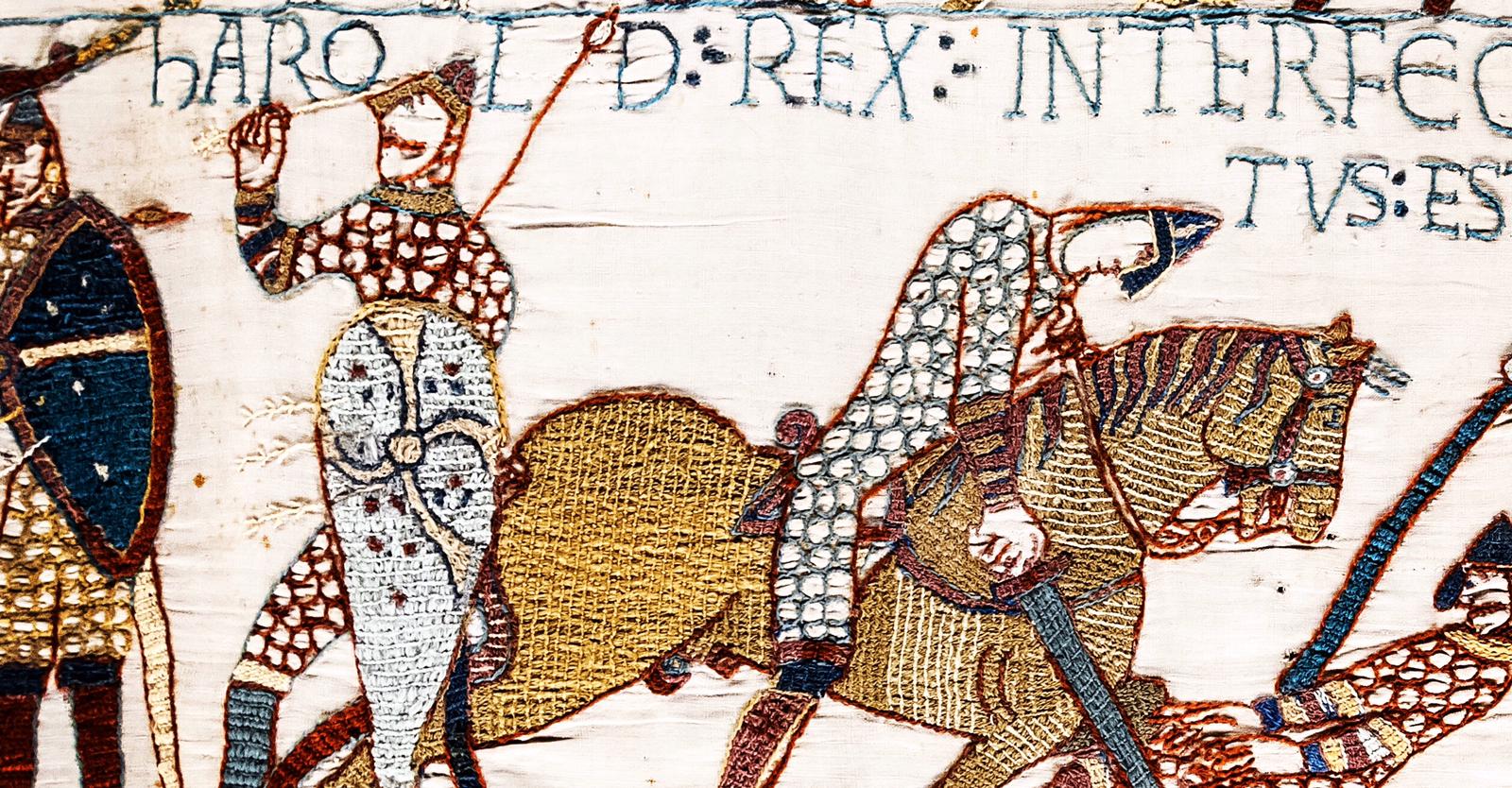 Looking back it seemed that the time of giants was as short as childhood.

Summer bloomed and failed and with the harvest, Harold’s father took the household to Portland, then Dover, where Harold and Swein watched the men hawking. Migrating birds massed there for the short sea crossing, and there were great spectacles of hawk against thrush, or shearwaters, or goose. The smaller birds rose in great swirling swarms. It was exhilarating to watch the hawk dive into them.

Sometimes the hawk caught their prey; and sometimes they did not, and Harold held his breath as the prey escaped.

If a bird could escape, then it deserved to live.

When they returned to Bosham the leaves were falling. They covered the ground in crisp copper drifts that swished with the sound of bishop’s silk robes. Night rain turned them sodden, but a few days of autumn gales and they were dry again, and piled up against the hall walls.

The first giant to go was Thorkel the Tall.

It was a week after Easter. Harold was five, and he was beating his younger brother Tostig with his wooden sword, when Swein came around the corner, a half-eaten apple in his hand.

‘The king has declared Thorkel an outlaw!’ she said.

Neither of them really understood what it meant, but they dashed to the hall to hear the news.

Their father had taken off his cloak, and now he paced up and down, his hands behind his back, with their mother sitting on the edge of her chair. There was an elation in the air. They could see it on all the faces. It was if they were not sure whether to flee or celebrate.

‘It is about time,’ his mother said.

His father kept pacing up and down. At last he broke his silence. ‘Thorkel will fight.’

‘Who will follow him?’ their mother said. ‘He’s no better than a Viking.’ She said the last word with disgust. As a Dane she knew all about lawless raiders. ‘His only joy comes from killing and seizing and frightening others. No one will follow him now.’

That afternoon everyone gathered at the Bosham church door as the reeve, a squint-eyed man who liked riddles, read Knut’s proclamation at the lych gate.

‘King Knut declares that Thorkel and his wife and sons are declared outlaws throughout England!’ the man read out. There was silence from most assembled, while one man cheered from the back.

Tostig came to stand beside him. When the hubbub had died down, he asked Harold, ‘What is an outlaw?’

In the days that followed everyone waited for news of Thorkel. Knut summoned the outlawed earl to his hall in Winchester to pay the weregeld. What would Thorkel do? They wondered. Would he pay or would he fight?

Swein was allowed to go with his father to Winchester, but Harold had to stay behind with Thorkel. He did his best to avoid his little brother, but there was no Swein to play with so he sat alone, back against the two-stepped mounting stone, and glared out towards the bay.

The wind was picking up. Low grey clouds were trying to rain. He let the rain fall on him, knew he was getting moss stains on his back but he didn’t care.

Only, the churl, Lame Egbert seemed unconcerned. He stopped before Harold one day and grinned with the three teeth that were left to him: long narrow roots, with red gums, and a long tongue that seem to curl snake like around them.

Egbert had turned a little deaf, and his speech was more indistinct and at first Harold didn’t understand. ‘Thorkel the Tall is on the war-path!’ he said, then laughed. ‘Ironside clobbered that bastard!’

A week later Harold was sent for.

Winchester was two day’s ride away. He was not allowed to ride his own pony, but went on the lap of one of his father’s huscarls. The man was named Wulfgyth. He did not talk much. He had broad, calloused hands. Half of one of his fingers was missing. The skin had healed over the end. They stopped at one of his father’s manors, where the bread was famed.

But there was none fresh-baked, only loaves already three days old.

As they approached the royal city Wulfgyth’s horse picked up speed. It started to trot along, already scenting home and hay and a warm stable.

Winchester always amazed Harold. The ditch, the palisade, the narrow streets of rutted mud, the bustle, the trade, the noise of so many crammed cheek by jowl. Wulthgyth led him through a maze of streets. They had to wait for handcarts, ox-teams, and a holy man carrying a plain wooden cross.

When they arrived at his father’s hall, Swein surprised him by running up and embracing him. He had so many questions about home, it was as if he had been away for a season.

Swein took him to see all the sights as if he had never been here before, but he was so glad to be here he did not care. They climbed the stone walls; threw stones into the swift river; watched pairs of cowled monks hurring between the two minsters; looked out from the windows of the Old Minster as the bells of New Minster began to clang.

After evening fell, the cathedral windows glowed warm and yellow with candlelight and Harold thought he could hear the singing of the monks through the heavy stone walls.

Mists rose from the water, and hung over the water meadows and along the river. He shivered with the evening chill as shouts of alarm spread through the town.

On the shoulders of the downs to the east they could see flames flickered yellow against the dark.

‘It’s Thorkel,’ Swein said, and for a moment Harold imagined Thorkel as a dragon, burning his way across the land.

They wanted to get home then and took the short-cut along the street of goldsmiths. Everyone was standing in the street, looking up at the beacons. ‘Time to dig a hole in the back yard,’ one of them joked.

Someone laughed, and although there was concern in the air, there was a lightness too, as if they were all excited that something was going to happen.

Of all the crowds, only his father seemed calm. He came out of his hall, threw his cloak over his shoulders and stood staring north to the dark blue-green line of the downs, that rose and fell and rose again stretching far to the east. ‘That’s the beacon at Blackdown!’ he said as puff of dark black smoke rose into the blue twilight sky far to the east. ‘And there! That is the beacon on the old mound at Chanctonbury.’ He sounded almost weary. Harold didn’t understand, and Godwin turned and gave his son a brief smile. ‘So it begins again,’ he said.

Next morning Harold watched in silence as his father took down spear and shield, mail-coat and war-helm from the hall wall.

‘Can I fight?’ Swein asked and his father laughed.

‘No,’ he said, and tossed him an old scrap of sheep wool, ‘but take this and scrub the mail with sheep’s wool till it shines!’

Swein, Harold and Tostig stood next morning to watch Gytha dress Godwin for battle. There was a silent solemnity to the moment, like watching their father’s chaplain dress for mass. No one spoke. At last Godwin buckled his sword and strode out to where his huscarls had gathered. Each man had two horses, mail, helm, speak, shields and sword. They had dressed in their finest kirtles of red and blue. Their hair shone bright on their shoulders, some men had it plaited to it would stay out of their faces, they were a grim band: their purpose was war.

Wulfgyth’s brother, a wild looking man with long fair moustaches and plaited hair held Godwin’s banner of a Fighting Man, white on a field of blue. His moustache hung almost to his chest. It had been plaited as well. Wulfgyth held the reigns of Godwin’s horse, and Godwin said something to him that Harold could not hear, and put his helmet on his head, then turned to briefly kiss his lined-up children, one by one, before swinging up into the saddle.

He said nothing, but there was a look on his face that spoke to all of them. This is the responsibility of a man who leads.

Those autumn gales closed the sea-lanes to all but whales and gannets: who cruised the cliffs like his father’s mounted watchmen: ever vigilant. White-maned waves broke far out as they heaved themselves over the Solent sand banks. The Isle of Wight rose from the sea-mists, dreamlike and distant as a Blessed Isle, and Harold wondered where Thorkel was now, sitting out the winter, and wondered if his sleek long ships would return with the spring – as eager and hungry as migrating birds.

Word came in the spring, that Thorkel had died in his sleep, a few days after Twelfth Night, one January night still cursing the English and their new king and threatening blood vengeance on them all.

‘So he never found a battle to end his days,’ Harold thought, and was sad for the old warrior, to die in bed.

Donate To NHS Charities Together

This story is being written to benefit NHS Charities Together, funding more than 230 NHS charities across the UK.

Sign Up Now!
We use cookies to ensure that we give you the best experience on our website. If you continue to use this site we will assume that you are happy with it.Accept